YS Up Podcast - Managing Governance in Sport with Pat Howard 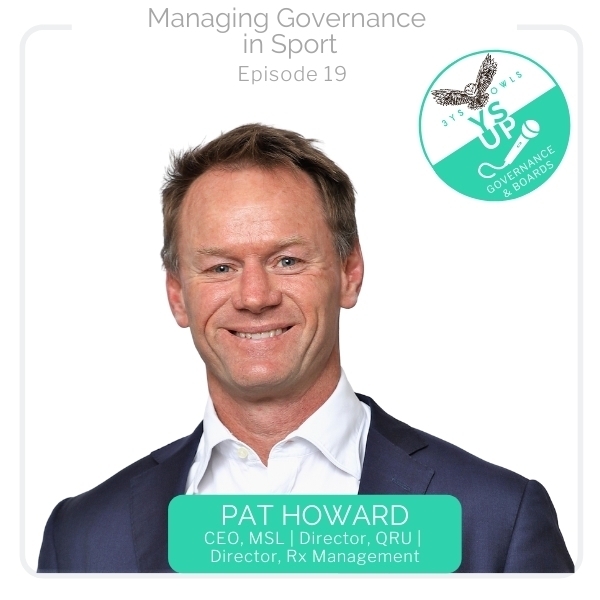 In this episode of YS Up Governance and Boards Podcast, 3YS Owls Governance Consultants, Ainslie Cunningham and Deb Anderson interview Pat Howard. Pat is the CEO of MSL Solutions Limited (ASX:MSL), and Pat is a current board member of Queensland Rugby Union, formerly performance director of Leicester Tigers from March to December 2005, and formerly the executive general manager of team performance of Cricket Australia. Pat joined Cricket Australia back in 2011, and during the period Pat has overseen World Cups and The Ashes in the men's and women's programs, and seen developments in coach education, pathway changes and restructuring of domestic competitions.

We explore with with Pat:  governance in sport, cricket and rugby union in Australia, Leicester Tigers, crisis management and Pat’s corporate roles outside of sport.

You mentioned the [Steve Smith, Dave Warner and Cameron Bancroft ball tampering incident]. But there was a precedent set, a couple of months before where two female cricketers had been banned for six months for a very small bet on this day cricket, and they got six months ban for betting on cricket.

So, automatically the sanction had to be fair and reasonable to those people. And then that automatically set a bar that had to be played with. And there were other people that wanted people sanctioned for life. And I didn't think that was reasonable either. And you then had ICC governance rules where the sanctions were one match, and that didn't seem fair and reasonable either in the circumstances due to the impact it had on the game and the country.

Pat Howard is the CEO of MSL Solutions Limited (ASX:MSL), and Pat is a current board member of Queensland Rugby Union, formerly performance director of Leicester Tigers from March to December 2005, and formerly the executive general manager of team performance of Cricket Australia. Pat joined Cricket Australia back in 2011, and during the period Pat has overseen World Cups and Ashes in the men's and women's program. Number one in all formats, but Men's T20 currently ranked second and seen developments in coach education, pathway changes and restructuring of domestic competitions.

Pat started his sporting career while studying a pharmacy degree at the University of Queensland. He went on to become a rugby union international at 19, winning numerous awards as a player and later as a coach. Pat has a full blue from the University of Queensland. In 2004, he became director of rugby at Leicester Tigers, considered the leading professional rugby club in Britain. Pat was 2007 European director of Rugby and the first person to be European coach in 2007 and player of the year in 2001.

In 2007, he moved back to Australia to become general manager of the high-performance unit of Australian Rugby Union, where he was responsible for the recruiting of the 2007 to 2013 Wallabies management. Pat spent three years as COO of Cromwell Property Group ASX 200, one of Queensland's largest listed companies with three operating segments, property investment, funds management, and property development. He was responsible for the day to day management of the business, including HR, IT and administration. For a period in the role, he was also head of property services. Pat is also joint founder and director of a pharmacy management business, which now has 18 pharmacies in three states. Pat is married with four children.

If you enjoyed this episode please remember to review, like and comment. You can leave a rating and subscribe for the latest episode at iTunes using the apple icon in the player above.

About Us - 3YS Owls - Governance Consultants

3YS Owls are a corporate governance firm and incorporated legal practice who specialise in providing a variety of services and solutions across corporate governance, company secretary, board advisory, strategy, risk and business consulting. Contact the team today to see how we can help you.

If you have a topic you would like us to explore, or you would like to join us as a guest on the podcast, we would be delighted to hear from you. Let's Get in Touch!