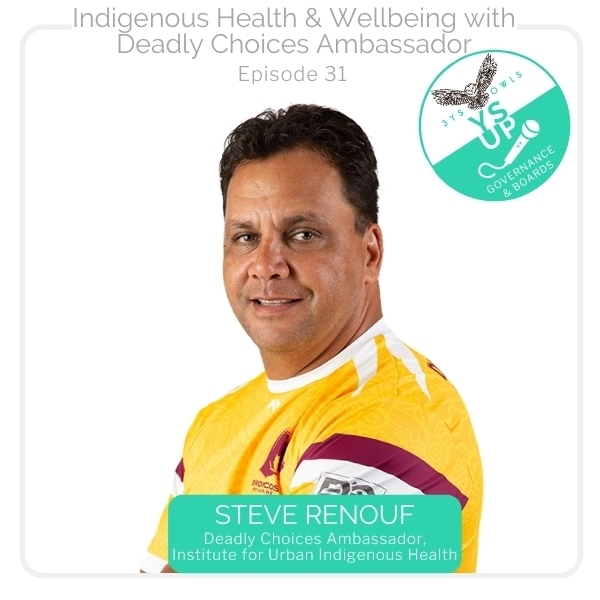 In this episode of YS Up Governance and Boards Podcast, 3YS Owls Governance Consultants, Ainslie Cunningham and Deb Anderson interview Steve Renouf. Steve is a proud Gunggari and Gubbi Gubbi man and is a rugby league legend having played 212 games for the Broncos, 11 Queensland State of Origin games and 9 International Australian Rugby League tests. We explore with Steve his role as a Deadly Choices Ambassador for the Institute for Urban Indigenous Health, living with diabetes, his role as the first Ambassador for Australian Diabetes Educators Association (ADEA) and some rugby league.

Deadly Choices is celebrating its 10 years this year. So, we're very fortunate that we are still operating the way we were. And Deadly Choices, obviously, was born out of the Institute for Urban Indigenous Health. When we first came together back in 2009-2010, we had to have a community engagement program for the community. And Ian Lacey and Keiran Lander were two young men at the time, and they're still young, they're a bit younger than me. But we employed them, brought them onboard, and they came up with the original idea.

So, Deadly Choices was born as a school’s program for Aboriginal and Torres Strait Islander kids, just around healthy lifestyles. So, eating the right thing, drinking plenty of water, and having plenty of sleep, and all that. So, it was reinforcing what would have been taught at school as well. But we specifically target Aboriginal and Torres Strait Islander kids within the school.

And then out of that came this idea that ... The boys come up with an idea ... Or the group at the time, it wasn't just the boys. That how about we look at these shirts that we made, the Deadly Choices shirts, you might see them around the place, and why don't we use them in the medical centres to try and incentivise people coming in for a 715 health check? And that's where it was born, and it was so popular, using that concept. And along the way we built partnerships to help with that.

And obviously, the first one being a partnership with the Brisbane Broncos. Because our community love Rugby League, especially up here in the southeast corner. So, having the Broncos come on board, back in 2013, as our first partner in our Deadly Choices program, it just really lifted the profile of what we were trying to do.

Steve is the Deadly Choices Ambassador for the Institute for Urban Indigenous Health. Steve holds the record for the most tries for the Broncos, with 142 tries. And was named in the Broncos' 10 and 20 year teams, the 25 year Grand Final team, and the Indigenous Team of the Century. He played 212 Broncos games, 11 Queensland State of Origin games, 9 International Australian Rugby League tests, and was part of four Premiership winning teams for the Broncos.

As a Deadly Choices Ambassador, Steve is an inspiration and fantastic role model. While he may no longer play football professionally, he still plays plenty of sport and is always keeping active and eating good food. He is a loving father to his five children and openly talks about his life with diabetes, encouraging everyone to make healthy choices. His favourite meal is garlic prawns cooked on the barbie, and his favourite exercise is going for a walk. You can follow Steve on Twitter, @therealpearl03. And Steve's deadly choice is to eat healthy, keep active, and keep his diabetes under control.

If you enjoyed this episode please remember to review, like and comment. You can leave a rating and subscribe for the latest episode at iTunes using the apple icon in the player above.

About Us - 3YS Owls - Governance Consultants

If you have a topic you would like us to explore, or you would like to join us as a guest on the podcast, we would be delighted to hear from you. Let's Get in Touch!